So one day this girl knocks on my door and says she’s with AT&T and has a great new package deal offer.  I really hate it when people go door to door.  I don’t like signing up for things in the blink of an eye, but I also don’t like to be rude, so I listen to the schpeel and then try to politely refuse.  This is not just with salespeople.  I had a really hard time turning away some Jehovah’s Witnesses that came to my apartment door a few years ago.  But you know as soon as they left I called the leasing office and reported them for their solicitation of….scripture? Pretty passive aggressive, I know.  but how do you turn someone away who’s offering to read the Bible with you?  I’m no heathen!

So AT&T lady pitches me a superfast connection for a much cheaper price than my Time Warner.  Sounds good so far.  She asks me if I have a DVR with my current service, and I say hell no, I would watch way too much TV if I had DVR and I would.  Well as my luck would have it, this service comes with 3 DVR’s.  Long story short, I sign us up because I have no idea what a fiber optic network is and the price is less than I am paying now, which is good because I’ve just had 2 babies and am going to quit my job.  Turns out fiber optic is good, and tech savvy husband agrees with my decision.
So back to the DVR.  It’s the best thing ever invented.  It has changed my life.  Sorry, Chris and Lori, I no longer have to go over to your house to watch DVR’d “Are You Smarter Than a 5th Grader?”  I have yet to DVR it myself, but I can if I want to.  Wanna know what else DVR has done for me?  Or to me rather?  I have two words for you:  Grey’s Anatomy.  Never watched it, and never saw what all the hype was about.  Another medical drama?  Whatever. Yeah, well “whatever” is laughing in my face now, because I am obsessed.  Will Meredith and Derek get together?  Break up?  Get back together?  Break up again?  Will Alex ever win Izzy over despite the fact that he cheated on her like 3 years ago?  Will the writers come to their senses and halt the lesbian story line between Callie and Erica (not that I have a problem with that – it just doesnt fit)?  I don’t have to make sure I am home on Thursday nights.  It will still be there Friday, Saturday, or whenever I get around to watching it.  But now I have to rent all the past seasons from Netflix so I can catch up on what I have been missing.  What happened with Denny Duquette?  How in the world did George and Callie end up married? How did Burke (Isaiah Washington, who was fired from the show) make his exit?  Pathetic you say?  Well I’ll have you know I am not alone.  There’s another member of this household who is also addicted to Grey’s clever dramatic endeavors.  I’ll let you guess who it is.
Oh, DVR, I love you.  You give me my “Grey’s,” capture my “Ugly Betty” for me, and ensure my “Lost” doesn’t get lost.  Get it?  Honestly I am only watching that again because I can. Wouldn’t have any interest in it other than the fact that I happened to catch it right when SciFi started showing it from the pilot and I can watch all the episodes in sequential order. Being a show of which you can’t miss an episode, we gave up on it somewhere in season 2 or 3 since we did not, at the time, have the magic of DVR.
And in case you were wondering, Rachel’s favorite Grey’s character is George, because he’s awkward and quirky, and Claire’s favorite is Dr. Bailey, because she kicks ass. 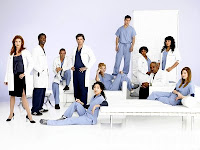