Lots of very cool things have been happening around here lately!  See if you can keep up.

Last week had a lot of things going on.  The girls started sweet potatoes, which they LOVE…and I’m so glad, because I love them too!  They are getting so big.  We also started avocados this week, which was met with a little resistance and funny faces, but after a few days they seem to be tolerating it well.  Next is butternut squash, which is very time consuming, with all the peeling, and I’m not sure if it will be cost effective for me to make it, but we’ll see. 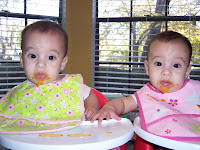 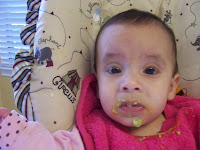 Not too sure about this avocado thing…
So last week we travelled to Dallas to spend Thanksgiving with my family.  We stayed with my Mimi and Pop, who graciously let us take over their house with all of our baby stuff.  I’m not sure if any of you have driven from Austin to Dallas on the Wednesday before Thanksgiving, but it’s miserable.  Unfortunately Christian had to work that day, but he was able to get out around 2:30, and we left around 4. Luckily I had spend the previous day packing and checking things off my baby checklist.  After stopping at about 4 times in attempts to air up my tires, only to find that their pumps were either broken or too crowded, we finally gave up and took our chances.  What can I say? We are rebels like that.  Anyways, the normally 3 hour drive ended up being a 6 hour drive, complete with a 30 minute stop in Waco to change diapers and feed the babies in an HEB parking lot.  Classy, I know.  After we got back on the road, they were supposed to go to sleep, but they had other plans, and those plans involved lots of screaming and wailing.  I love having my babies on a predictable schedule, but when one little thing changes on that schedule, you’d think their world was coming to an end.  But they eventually tuckered out and slept the whole rest of the way. Even through a desperate attempt to find a silly Whataburger after taking the wrong exit and going through a ton of construction, after which we passed by 3 more Whataburgers in the following 5 minutes.  Grrrr!
Our stay in Dallas was great!  Although it was late when we arrived, we let the girls get a little face time with everyone, and then as we were preparing them for bed and changing their diapers, Rachel decided to pee all over herself and her changing mat, so she went straight into the bath (normally I might just wipe her down, but when it gets in the hair, I draw the line).  Not really what I wanted to do at 10:30 at night, but whatever.  Their first night was rough, again, due to the change in schedule, but they did great the rest of the nights.  And we got a great surprise – Mom and Dad and Mimi and Pop pitched in together and got us 2 highchairs!  We were so grateful because we knew we really needed to get them and were reluctant to fork over the $$$ for them.  Ah, that’s life on one income!
Thanksgiving day was nice, as always, with everyone making “their” dishes.  Uncle Jamie, the family chef, prepared the turkey, Mimi made the stuffing and deviled eggs, my sister Lori made her pea salad, I made my (formerly my mom’s) hashbrown potato casserole, and Mom and Dad made creamed spinach, a newcomer to the menu, but very tasty!  After gorging ourselves on all of the food, we headed for the dessert table – Mimi’s Mississippi Mud (all I would want to eat if I were taking my last breaths) and my pumpkin cake (courtesy of my friend Vanessa!).  We all ended up fat and happy!  After the girls woke up from their nap, they got their own little Thanksgiving meal of sweet potatoes!  The rest of the time was spent hanging out with the family, playing cards, playing with the babies, and just being together.  Here are some pictures! 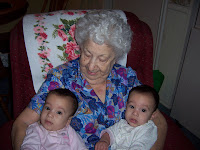 One of the most precious sights of the holiday weekend!
Mimi and the girls. 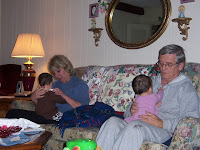 Nana with Claire and Grandpa with Rachel 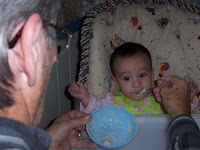 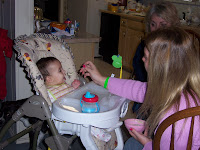 Aunt Lori feeding Rachel
Other happenings around the Torres household… 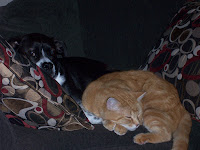 This has been happening a lot lately…if you can’t really see it, that’s our normally ornery cat Tiger curled up with a somewhat nervous Sammy, who kind of blends in with the couch.  I think Tiger is going a bit soft as he gets on in years. 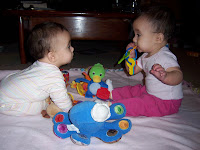 The girls can sit up really well now!  They can’t pull them selves up yet, but when sat up, they can stay and balance themselves…for a while.  There are still quite a few wipeouts. 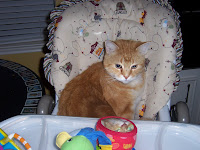 I’m sure those who purchased the highchairs will be so relieved that Tiger approves of them.  I find him sleeping in one of them at least once a day.  But now he looks like he’s trying to decide between Duckie Chewy and the red mirror.