As in TWO runny noses, TWO little booty rashes, TWO days until we leave for North Carolina, and TOO, TOO, TOO much to do.  I’ll try and keep any evidence of my escalating stress level at a minimum.

So last week Big C came own with a cold, the kind that made him hock up throatfuls of goodness every 3 minutes, followed by lots of yummy nasal congestion.  And unfortunately, no matter what kind of precautions you take, when you are in close proximity to two little ones, they are almost bound to get it, and get it they have.  Which also means I am expecting a visit from the Snot Monster in about 3 or 4 days myself.  So far just runny noses, sneezing, and a little coughing on Little C’s part, but I’m praying that it doesn’t turn into a full blown fever included ickiness.  I’m already dreading the plane ride enough as it is.
We leave for NC on Thursday, traveling with our nephew Khayman, who’s meeting us in Austin from his home in Albuquerque, and both babies on our laps.  It’s going to be a long road (sky?) to our destination of Raleigh, but it will be well worth it, because I know no matter how runny the noses, Grandma Tankersley, Aunt Michelle, Aunt Jenny, Aunt Jessie, and Cousin Madi are just going to eat these girls up.  Grandma hasn’t seen the girls since they were 2 months old, and Aunts Michelle and Jessie since then were about 3 months old.  And maybe even Uncle’s Scott and Ralf and Cousin Brandon will sneak in a hug and kiss when we aren’t looking.  They won’t be able to resist.  It’s going to be an adventure.
Other than the impending love fests going on with the babies, we are going to be staying at a beach house at Nag’s Head in the Outer Banks for 7 of the 10 days of our vacation.  Sand, sun, surf, and hopefully not too many sniffles.  But judging from our other attempts at water sports so far, I’m not sure how it’s going to go. 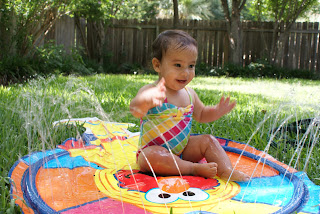 Water Baby Claire.  Not worried about this one.  At. All.  Her nick name, after all, is Claire-Devil (like Dare Devil, NOT like an evil red being with horns and a pitchfork). 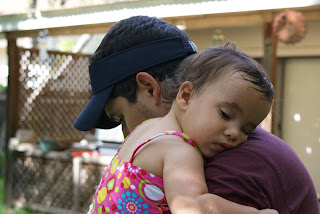 Land Lover Pachey.  Good luck peeling her off of you once she sees the water.  Maybe it’s the cold temp.  Maybe it’s the not so great feeling of water seeping into and filling up her diaper.  That’s okay.  I love the hugs.  But the time will come when we’ll just throw your a** in.