Two babies provide you with double a lot of things.  Double the diapers, double the food, double the clothes, but best of all is double the love.  There’s nothing better than two babies pulling themselves up onto you to give you simultaneous hugs.

Rachel has always loved to hug everything, hence the nick name Huggy Bear.  Her latest victim — I mean object of affection — is Tiger, the big, orange, sometimes ornery cat.  And guess what.  He loves it.  He always comes into the living room and sprawls out on the floor, a perfect magnet for two babies who love to say, “Kitty!” Both girls love to go over and check him out and pet him.  Rachel goes up to him, gives him some rubs, then lays her head down on his side and pats his fur.  She even leans into him and gives him a kiss, accompanied by a huge “Mmmmwa!” 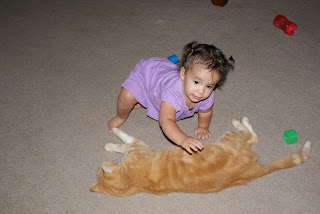 Kitty! Giving him a few love pats. This makes me nervous, because he usually doesn’t like to have his tummy touched.  But he’s been amazingly patient with the Boos. Well, when they’re not yanking his fur out. 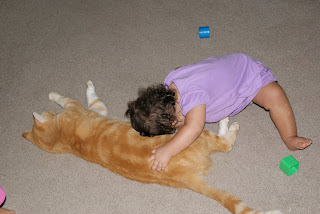 It’s an all out love fest.  She LOVES to lay her head down on him and give him little pats. That’s my Huggy bear!
Claire is also a huge sweetheart.  She loves to interrupt me singing the nap time song to her and leans in to give me a kiss. She blows kisses all over the living room. She has always been a little aggressive, which we have been working on, and our efforts seem to be doing her a lot of good. While she used to almost seek out Rachel in order to pull her hair, she’s learning to be more gentle, giving her little pats on the head instead.  But I have to admit, I still watch her like a hawk.  Her latest development is to pat an upset Rachel on the shoulder, as if to say, “It’s okay, Sissy.”  She even goes so far as to lean in and attempt to give her hugs. The only problem?  Due to the months and months of hair pulling that had previously occurred, Rachel has some trust issues with Claire, and she’s still a little apprehensive about what’s going to happen.  So now we’re working on THAT part.
But this morning we got to witness the best sight — the girls walked toward each other giggling, leaned in, and hugged and kissed.  Too awesome for words.  And pictures, apparently, because I have none.