Skip to content
…you both could fit inside the Boppy pillow and would sleep there in my lap in between feedings? 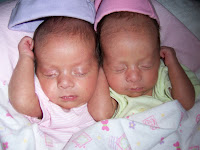 …I used to peer over the side of the crib at you sleeping together and shake my head in disbelief because I STILL couldn’t fathom that there were two of you?
…you used to sleep in the bed with us, all cuddled up in the crook of our arms?
…your daddy would sometimes bravely feed both of you in the middle of the night, one after the other, so I could get more sleep?
…we had nature sounds on almost 24/7 to help you sleep?
…I used to nap with both of you in the bed? You would both face me, spooning each other, and we would snuggle up for hours.
…we went to the lake with Aunt Michelle and Aunt Jessie and you slept by the edge of the water in your carriers? 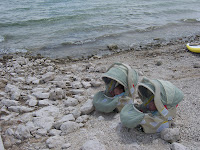 …you used to snuggle up together when you slept?  I would go check on you after putting you both down and you had crept towards each other so that your heads were together. 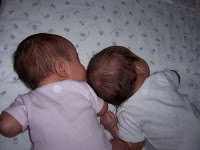 …Claire laughed for the first time at Mommy making lots of “ssss” sounds? You thought it was hilarious!
…one of you would wake up too early from a nap, and I would snuggle up on the couch with you?
…one (or both) of you would wake up too early for the day and we would snuggle up in bed with you?
…you dressed up as little white mice for Halloween and were so totally cute? 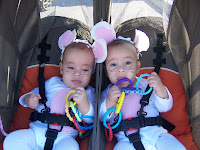 …you started eating solid foods in your Bebe Pods because we didn’t have high chairs yet? 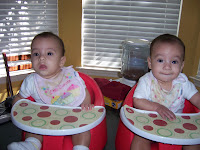 …you were 9 months old and could still wear your size 3 month Christmas dresses? 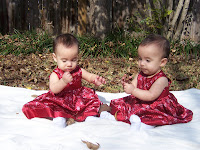 …you met the big guy? 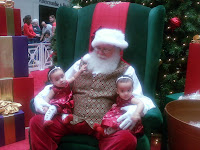 …you were completely overwhelmed by Christmas?
…you used to wear your cute little velour sweatsuits everywhere?
…Skittles and Rosebud? 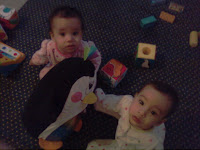 …Rachel had to go to the ER after her vomit fest? 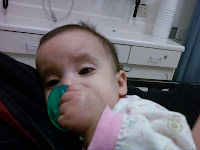 …we drove an hour to Lockhart just to eat barbeque? 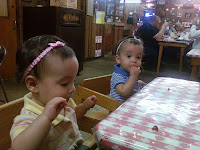 …we were able to have a picnic and you would NOT try to crawl away? 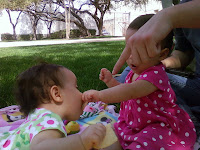