Skip to content
Every once in a while, usually when the kids are screaming and the sh*t is about to literally hit the fan, Christian will get a dreamy, far off kind of look in his eye, and I know exactly what he’s thinking: Mexico. More specifically: Playa del Carmen. 2007.
Ah, it seems like so long ago, yet still like only yesterday that we were sitting on the pristine beaches of our fancy schmancy upgraded resort, drink in hand, still full from the previous night’s ridiculously amazing buffet and nursing the previous night’s hangover. *sigh*
We were all at a point in our late 20’s (*ahem* or early 30’s for some people. The blonde people. On the left.) where we were ready to start having kids. And while we thought that we could just keep living this way forever, hanging out every weekend over a few drinks, taking trips together, with no real responsibilities other than mortgages, jobs, and each other. But it was time to start, and Playa del Carmen trip 2007 was aptly named “Operation Insemination.” We were gonna do it. Literally. 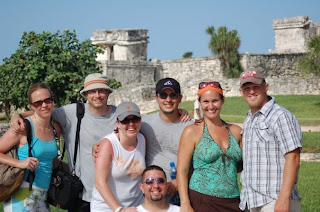 This was us then. I have no idea why I am so slouchy. Maybe I am trying to keep Fred’s head from feeling like it is all alone at the bottom of the picture. His other half, Ashley, wasn’t with us because we didn’t want her pregnant ass bringing us down.*
Well, it didn’t happen then for any of us, but let’s just say the operation didn’t end once we landed back on US soil, and I was pregnant within a month. And you all know how that turned out. My friend Lori announced she was pregnant in December, and my friend Reba shared her exciting news the following December. But before she could pop that one out, I had more exciting news. Then so did Lori. Then so did Ashley.
And this is us now….3 and a half years and 8 kids later. 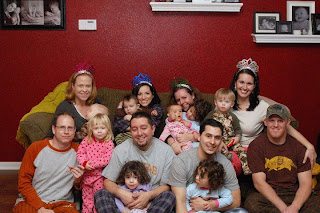 I say this operation was a success.
*Totally kidding. We planned this trip months before Ashley got pregnant, which was also months before we even met her. She was, of course, invited, but seeing as she had just met us all, I think she wasn’t sure she could handle the awesomeness that is the PR. Ok kidding again. I think it is us who should have been afraid of her awesomeness.