Note added after publishing: I should have identified my bloggy friend Corrin from Oh Hey, What’s Up? for inspiring this post. The first time we met and I mentioned I had twins, she said the ever popular phrase below…


I get this comment a lot. And it always makes me laugh out loud.


Maybe I don’t burst out laughing to their faces, ’cause that would just be rude. But it does always make me chuckle. And I may involuntarily shoot them a look that resembles “You have no idea what you just asked for.” If you can imagine what that looks like.


Are these people crazy? They have no idea the chaos and insanity that they’re wishing upon themselves! The excruciating and debilitating loss of sleep! The feeling that you are nothing but a milk making machine with a neon sign that says “OPEN” 24/7! The inability to go anywhere by yourself! And the crying, oh, the crying!


Having twins never once entered my radar, and when my doctor found that second heartbeat on the sonogram, I almost fell out of the stirrups as my mind immediately raced to dollar signs and things coming in pairs. Two cribs! Two daycare tuitions! Two college educations!!!” I needed a paper bag, stat.


I consider myself lucky in the fact that I had my twins as my first children, so I don’t know what it’s like to care for just one baby. When people would ask me what it was like, all I could say was, “It’s all I know.” I wrongly assumed that my friends with just one baby had it so much easier, and I eventually learned that it’s all relative. A matter of perspective, if you will.


As Rachel and Claire grow, so does their relationship. They’ve been together all day, every day for the past 3 years. They’ve never known a life without each other. And as they grow, our goal as their parents is to help them each develop their own sense of self apart from each other. We want them to be close, but we want them to be able to exist and succeed as individuals, and not just be able to function as a unit.


But in these present days, I relish in their togetherness, their closeness, and their extreme cuteness. The hugs, the kisses, the heartfelt apologies of “I’m so sorry, Sissy” after an altercation.


Claire seeing Rachel trip and fall, and bolting across the yard to get to her even before I can, helping her up and asking, “You okay, Sissy?”


Rachel on the hunt for her blue ball, but coming across Claire’s purple frog, proudly bringing it to her, announcing, “Sissy! Here’s you frog!” And then repeat with any toy she so much as saw Claire play with that day.


Running from opposite ends of the sidewalk, arms outstretched, almost colliding in a sisterly embrace.


But most of all, I love it when I catch one watching the other, as if studying their reflection intensely. I wonder what they’re thinking as they stare at their sister who looks just like them, their sister that they’ve never known more than a few hours without.


And I wonder if they know what they have.


So I may chuckle at you for not realizing that you’re absolutely nuts for wishing twins on yourself. But maybe you’re on to something. Because you forget the crying, the juggling, the guilt of only being able to tend to one at a time. You recover from the lack of sleep.

But you don’t forget this. 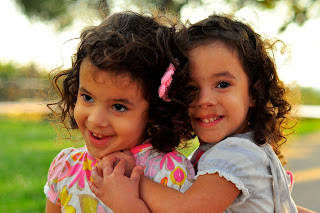