Moms: I need to pick your brain.


Even before the 3rd birthday extravaganza and the impending living room takeover by all the toys, I was feeling a little disheveled. Unorganized. And some days like I was just plain losing it. Today comes to mind.


Why is it that the older your kids get, the smaller their toys get? Little parts and Little People, all of which end up all over my little house.


I need some containment. Here’s an example of what you might find randomly laying around: 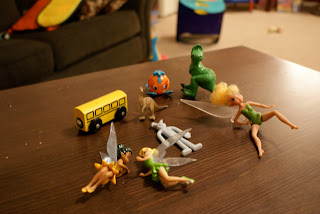 A yellow magnetic train car (1 of 3, the other 2 which are MIA, but you know as soon as I toss this one they’ll show up); a tiny plastic dinosaur that really hurts when it pokes you in the face; a Zooble who is currently missing his “happy-tat;” Rex the dinosaur, on a short break from Claire’s grip; a one-winged Tinker Belle, minus dress and shoes; a weird rubber bunny; and a tiny Tinker Belle and Irridessa, trying to figure out where the hell the rest of their tiny fairy friends went.
These are the toys that haunt me. The toys without a home. And this is just the tip of the homeless toy iceberg.
Bins? I got bins! I have large, square canvas bins, but they we getting dumped each and every day, their contents getting strewn about the entire house like it was Mardi Gras. They’re now being used for stuffed animals, who also get strewn about, but not as readily.
I got smaller plastic bins. With lids! I would sort and organize these little things! Which led to this Box-O-Randomness: 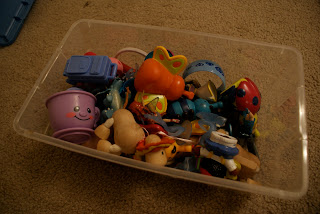 I know. We have too much random crap. Why is some of it so hard to part with??? And why, oh why is the most favorite game ever the game of “Let’s take all this crap the THROW IT BEHIND THE TV!”
Plus? When my husband cleans up the toys (which is every night, and I know I’m lucky to have a man who pitches in as much as he does, but…), he fails to put things in the correct bin, furthering my frustration and need to organize. He’s so carefree! He just tosses things into random bins or sets them up on the book case! Because as long as it’s not on the floor, it’s clean! It’s organized! Look what I did!
How hard is it to adhere to my organization system that’s not really an organization system in the first place but hey I’m trying here so throw me a bone and stick with the plan mister!
I have a bin for Little People and all of their Little Accessories, a bin of Barbie-type Disney princess dolls, and then I have this bin of random crap. And that’s about as far as I’ve gotten. Oh there are plenty of larger toys: doll houses, stuffed animals. But there’s also the puzzles, the cuttable fruit, the tea set with cups and plates, and my nemesis: the play food… It never ends.
So I have to know: What in the world do you do with all these little, random things??? Keep in mind, the more random the toy, the greater the likelihood that it’s something the girls are obsessing over. For days now I’ve been avoiding questions about a rubber frog I threw out weeks ago.